There are thousands of species of beetle, the vast majority of which are not classed as pests and rarely venture into premises. A small number do however represent a significant problem causing damage to a wide variety of products, materials or even the structure of the building itself. Correct identification is therefore required prior to any treatments being undertaken. 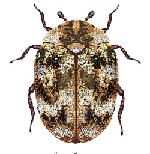 The varied carpet beetle is a textile pest. The larvae commonly referred to as ‘Woolly Bears’ feed on natural fibres resulting in damage similar to that caused by certain species of moth. As the name suggests, carpets containing a high percentage of wool are favoured breeding grounds particularly in areas difficult to reach with a vacuum cleaner.


Items of clothing or articles containing wool, fur or feather are also susceptible to damage particularly during the summer months when they are often stored for prolonged periods of time. Storage of these items in covers or sealed containers when not in use will greatly reduce the need to discard or replace them.

An oval black beetle with white spot on each wing. Typically 4-6mm long.


Found in a wide variety of products including furs, skins textile and grain.

Although differing slightly in appearance to the varied carpet beetle, the fur beetle has a similar life cycle and significance as a pest within homes or commercial premises.


Fur Beetles can also be present in stored food products.

The Furniture Beetle, more commonly referred to as ‘Woodworm’ is one of a number of beetles whose larvae are responsible for damage to furniture or structural timbers within buildings.

Other species of beetle classed as timber pests include the House Longhorn Beetle, the Powder Post Beetle, the Death Watch Beetle and the Wharf Borer.

For more details please visit our section below on Woodworm.

The Biscuit Beetle is a tiny beetle and one of a number of beetles which attack stored products including a variety of food stuffs.

The most effective method of eradicating the beetle is to discover the source of the infestation.

As the name suggests this particular beetle survives on fungus and mould where damp is an issue.

Fungas and Plaster Beetle are frequently encountered in newly refurbished premises or premises where a lack of ventilation is an issue resulting in higher than normal humidity. 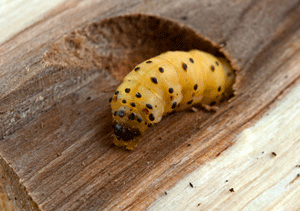 The generic term wood worm is actually very misleading since it is in fact not a worm at all but a beetle.


The furniture beetle, to give it its correct name, is one of a group of beetles whose larvae bore into timbers within buildings and emerge to leave distinctive small holes in furniture or the timber structures of buildings. 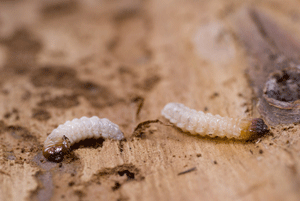 Other beetles with a similar life cycle are the wharf borer, the powder post beetle, the death watch beetle and the house longhorn beetle


Whilst we do not currently undertake these treatments ourselves we do have access to specialists in this area whom we are happy to recommend. 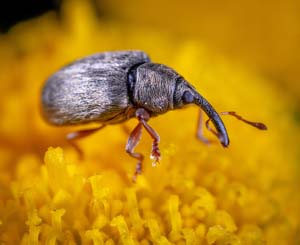 Weevils are 1/8- to 1/4-inch long, and are usually distinguished by their long snouts. They can live up to 8 months and may venture far from the food originally infested.


Often called flour beetle as that is where they are often found.


Weevils usually live and feed inside the food. Once fully grown the adult weevil eats its way out of the grain/seed.


Store grains and other weevil-tempting foods in dry areas, and always throw out any food where you find weevils. Clear any cupboards where you've found weevils and clean thoroughly before storing food there again, using a vacuum to be sure you have removed all the larvae.


You should avoid using chemical treatments to get rid of weevils because most are not safe to use around food. 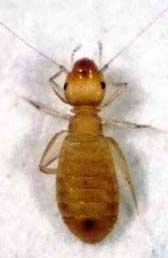 Booklice do not only thrive in books but are happy to take root in any dark, warm and humid places where damp might be found.


Although they are harmless to humans, they can quickly grow in numbers which may be difficult to control.


They leave behind little evidence so you may not know you have a problem unless you spot them yourself.