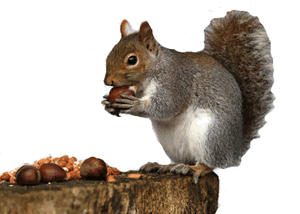 The grey squirrel is one of our largest and certainly one of our most destructive rodents.


As with any rodent, once inside premises, their gnawing can result in damage to electrical installations, cabling or other materials. Squirrels will however, often take this one stage further causing damage to soffit and facia boards and gnawing on structural timbers within the loft void itself. They are also known to gnaw lead flashings on roofs, appearing to enjoy the texture of the soft metal.


Their presence on bird feeders and their ability to overcome our attempts to keep them off can provide hours of entertainment and a talking point at parties. What is perhaps not so well known is that they are major predators of the very song birds we are attempting to help.


During the nesting season, the squirrel uses these very same skills to rob birds’ nests of eggs or chicks. 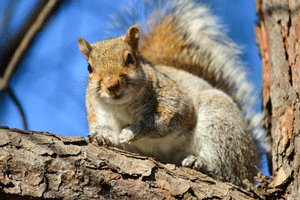 Even in woodland, grey squirrels are often regarded as a major pest, due to their habit of stripping bark. This can result in extensive damage, especially in young plantations often resulting in the trees themselves dying off.


Another area of concern is solar panel installations on roofs where they are known to take up residence. Again their gnawing habits can result in costly damage, especially to the wiring of the installation itself.